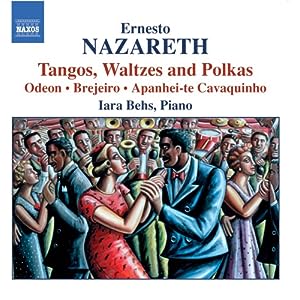 Along the journey of musical discovery our preoccupations centre not on the well-trodden tourist retreats but on those digressions less known, unspoiled and far from the madding crowd. The music of Ernesto Nazareth represents one such destination bestowing new and undiscovered delights.

During his lifetime Brazilian musical and cultural tastes were based on those prevalent in Europe. This subordination did not, for a long period, allow genuinely Brazilian classical music to blossom. Prejudice by the “establishment” inhibited the development of indigenous classical music and excluded it from current programmes of institutions such as the National School of Music in Rio de Janeiro. On one occasion an attempt to include four original compositions by Nazareth in the current programme of the School initiated such violent reaction that police intervention was necessary. Even until a few years ago very few pianists of serious intention dared to include the music of Nazareth in their repertoire, since he was not reputed to be a ”classical” composer.

Nazareth was not alone in having been strongly influenced by the folk music of his native country. This had in common with fellow countryman Heitor Villa-Lobos who on hearing the original compositions of Nazareth pronounced them to be the very embodiment of the soul of Brazil. Nazareth’s composition “Tenebroso”(Gloomy) is accompanied by instructions for the player to imitate the guitar in the lower register. This instruction recurs in one of his most famous compositions “Odeon.” In the composition “Plangente”(Lamenting) one hears echoes of the saudade found in the fado. This form of music, imported to Portugal from Brazil in the 19th century by members of the king’s consort in exile there, ironically became the national Portuguese music. (To explore the incredibly beautiful fado listen to Post-Scriptum, Cristina Branco - Empreinte digitale ED 13121).

In his youth, Nazareth was commissioned to promote the music of publishers, including his own, by playing in their establishments. With the invention of the cinema arose the need to accompany silent movies. Nazareth was given a contract by the Odeon Theatre. Here his accompaniment with original compositions, including “Odeon,” attracted many musicians who came just to hear him play.

Nazareth’s output comprises predominantly Brazilian tangos and waltzes of which he wrote more than eighty, and forty respectively. The titles of his work are often humorous and refer to everyday situations in Brazil, especially to the life of the cariocas or inhabitants of Rio de Janeiro. The influence of Chopin is particularly evident in the waltzes eg. Turbilhão de Beijos [track 7] brings to mind Op.69/1 “L’adieu” (Naxos 8.554539 - Idil Biret). He studied the composer’s scores in order to teach himself improved methods of composition, and often performed the works of Chopin on piano.

Nazareth died in 1934, during his lifetime having witnessed the emancipation of the slaves, and establishment of the republic. His charming music remains more powerful than any past debate on to which particular genre it belongs.

As one of Brazil’s most successful concert pianists, Iara Behs is particularly well qualified to perform the music of Nazareth. She is a fine player with excellent empathy for the rhythms and nuances of her country’s indigenous classical music. In addition she engenders audience interest and curiosity in the works she is about to play through informative introduction aided by knowledge of five languages in addition to her native Portuguese.

It may be more than co-incidental that some musicians appear to excel particularly in interpretation of music composed by fellow countrymen. If indeed such a relationship exists, no greater validation could be provided than that of Nazareth/Behs.

In a “perfect world” of classical music, new releases would contain all new and relatively unknown music; comprise a balanced and enjoyable programme; be exceptionally well performed and exhibit high levels of technical and sonic excellence. This new recording by Iara Behs fulfils all these criteria. An added bonus is the erudite and unusually informative accompanying notes presented by the performer. This is a recording that will bring joy to disciples of fine music.