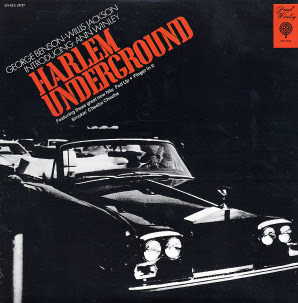 Tracklist :
A1 Smokin Cheeba Cheeba
A2 Fed Up (Vocal)
B1 Finger In It
B2 Ain't No Sunshine
B3 Fed Up

Holy cow! This is the monster lost funk album that features Willis Jackson, George Benson, and Dave Baby Cortez on a bunch of tripped out blunted breakin' cuts! Worth it for the price of "Smokin' Cheeba-Cheeba" alone, but also has the great breakbeat version of "Ain't No Sunshine" with a tenor solo by Willis Jackson, and the slow bluesy talking cut "Fed Up", a baaaad rap about a couple splitting up. Very dope. Plus, we've also even heard that George Benson was never even on the record, although he's listed on the cover. Even more mystery, but still great grooves, whoever the guitar player is!
permalink
Partager cet article