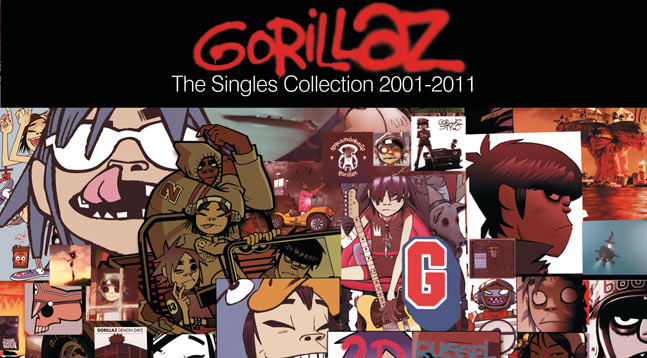 By Wyndham Wallace from http://www.bbc.co.uk/music/reviews/pdhf

Think of Blur’s Damon Albarn and one thinks of Britpop, which is rather unfair, given that he’s spent the last 15 years working on projects associated with Mali (Mali Music), Iceland (the 101 Reykjavik soundtrack), China (Monkey: Journey To The West), the Democratic Republic Of Congo (Kinshasa One Two) and more. But while his former rival Liam Gallagher reduced himself to a comic parody, Albarn found inspiration in comic art, teaming up with Tank Girl creator Jamie Hewlett to form the ‘animated pop group’, Gorillaz, in 1998. This summary of their career proves they were no joke.

Perhaps the most striking thing about the music on offer here is how stripped down it is. The influence of dub and hip hop looms large, especially on tracks featured from their first two albums, their self-titled debut of 2001 and its 2005 follow-up, Demon Days. These see simple instrumentation bedded down over programmed drumbeats that sounded nostalgic even at the time of release. (Once upon a time they’d even have been described as ‘baggy’.) But Albarn’s alter ego seems to allow him to shake off concepts of indie credibility that he may otherwise have clung to, aiming instead for the pop jugular with the simple melodies of Feel Good Inc and Clint Eastwood, whose loping gait does nothing to diminish that chorus: "I’ve got sunshine in a bag", a sly reference to the actor’s classic The Good, the Bad and the Ugly (also the inspiration for the name of another Albarn side project, The Good, the Bad & the Queen).

Eastwood’s there again on the brilliant Dirty Harry, another shuffling beat underpinning an uplifting children’s choir until Bootie Brown takes the mike. Albarn’s social conscience is also in evidence here, the kids singing "I need a gun to keep myself from harm", an idea echoed (obviously) in Kids With Guns. 2010’s Plastic Beach birthed four further singles, but they made less of an impact, despite the fact that they see Albarn pursue a more commercially pop route: Superfast Jellyfish demonstrates an attractive lightness of touch, while On Melancholy Hill reflects its name perfectly, Albarn sounding glum over a candyfloss minor-key pop classic that deserved to peak far higher than 78 in the British charts.

Sadly there’s nothing here from their iPad album, The Fall, and instead we’re given the sped-up, somewhat disorientating Ed Case/Sweet Irie version of Clint Eastwood. But that fails to distract from the fact that Albarn has, against the odds, proven himself to be one of the most inventive of the UK’s high-profile musicians over the past two decades. Admire the riches this national treasure has bestowed upon us. There’s plenty to smile about, though Gorillaz remain no laughing matter.