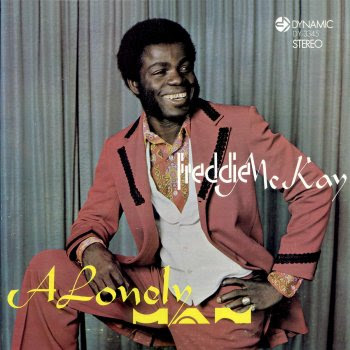 Tracklist :
Lonely Man
Black Beauty
I'm A Free Man
If I Should Dream My Life Over
Losing Your Love
Peace In The Garden
Where Can I Find True Love
I'm Not Your Love
Rendevous
100 Pounds Of Clay

McKay, born in Saint Catherine Parish, Jamaica, is regarded as one of the most soulful singers to come out of Jamaica.McKay first recorded for producer Prince Buster in 1967, his first hit coming the same year with "Love Is A Treasure", recorded for Duke Reid's Treasure Isle set-up. McKay then enjoyed a fruitful spell with Coxsone Dodd, recording a number of popular songs for Studio One backed by The Soul Defenders, including "High School Dance", "Sweet You Sour You", and "Picture On The Wall", the latter the title track of his 1971 debut album. A second album, Lonely Man followed in 1974. McKay recorded a duet with Horace Andy in 1975, "Talking Love" which was also a hit in Jamaica. McKay enjoyed another hit in 1976 with "Dance This Ya Festival", which won the Jamaican Independence Popular Song Contest that year. McKay teamed up with Alvin Ranglin for the misleadingly titled The Best Of Freddie McKay (it was an album of new recordings) in 1977, McKay now adapting to the prevailing roots reggae style. The Ossie Hibbert-produced showcase album Creation followed in 1979, and Tribal Inna Yard in 1983.

McKay maintained a faithful following until his death in 1986 from a heart attack,shortly after finishing his final album, I'm a Free Man.