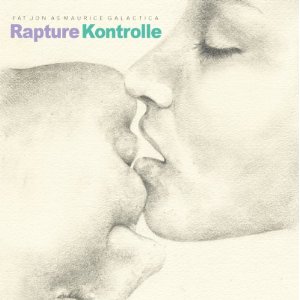 With Rapture Kontrolle, Fat Jon returns under the alias of Maurice Galactica (previously heard on 2002’s Humanoid Erotica) to present another round of interstellar beatscapes. Under the auditory tutelage of Humanoid Erotica (and a handful of other records at hand) my eardrums wised up to the joys instrumental music had to offer. I’d always been a fan of instrumentals, however self-sufficient instrumental music is arguably something different – but unarguably something Fat Jon is legendary for. Because of this, there’s a slight apprehensiveness in writing about his music, like anything said will be a pretentious attempt to define his assured craft which, in all truthfulness, escapes many definitions. But here goes… Like I’ve found with the bulk of Fat Jon’s discography, Rapture Kontrolle sounds almost inoffensive upon its first spin as it predominantly utilises familiar elements of down-tempo music to induce head-nodding grooves. However, it’s in the replays that things come to life; each one revealing a new layer, a new favourite track, until the whole thing damn near sounds like a masterpiece. It happened to me with Humanoid Erotica and, in time, it’ll likely happen to me with this. I credit this to what I believe to be Fat Jon’s masterful use of nuance; you’ll find transitions occurring effortlessly and instrumentation coming and going stealthily from all corners of the tracks. The elements of music are like tai-chi; delicate in their movement but resolute in their purpose. Even the first track “Thoughtform” – which, true to its name, initially sounds like a discordant tangle of musical synapses firing uncontrollably – becomes something more malleable in Fat Jon’s mind as he subtly draws out harmonious elements. Elsewhere, fleshed-out characters are created within the tracks from the instruments themselves. There’s the flute on “Magic Flute” hitting Minnie Ripperton level whistle-registers, the woebegone strings and woodwind on “Losing You”, and the dancing hi-hats and buoyant bass on “Thirdbass Allday”. Things get more up-tempo in the spirit of Humanoid Erotica with the G-Funky space jam “Eternal Type Satellite”, “Various Randoms” in its entirety, and “Galaxy Class” which contains beat breaks ill enough to get people forming a circle for the BBoys and BGirls; all before it evolves into a more expansive spectacle. Then there’s “Intellect Bombs” – lordamercy – this is Fat Jon at his synaesthesia-inducing best. Immediately conjuring up a potent soundscape, understated vocal elements are introduced to great effect (more so than some of the vocal-heavy tracks from Lightweight Heavy or Afterthought) until the piano work prevails through at the end. This is the kind of music that makes you want to look up at the night sky and ask some big questions. Rapture Kontrolle plays like a lot of Fat Jon’s art but, as you’ve probably gathered thus far, that’s no bad thing at all. Despite this, the album is still far from predictable. With so many styles presented over the years, some more experimental than others, Fat Jon has a wealth to choose from at this point, and it’s only from this that I can draw any criticism. With so many styles in this album it’s expected that I personally won’t dig all of them, and there are a couple of tracks where I’m not feeling the vibe. Regardless diversity is almost always a good thing and this album is perhaps his most diverse yet.Source