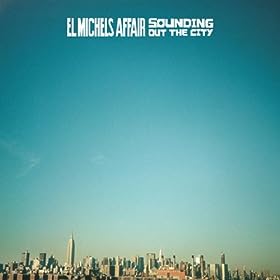 As the work of DJ Spooky and other turntablists indicates, there's a seemingly limitless supply of rare and obscure deep funk grooves out there. However, attempts to replicate the sound have mostly been botched by inappropriate use of "updated" instruments and technology, creating a mutant half-breed that never quite works. Not so with the debut album by Brooklyn's el Michels Affair. Led by organist/drummer Leon Michels, this instrumental group has created a near-perfect simulacrum of late-'60s/early-'70s deep funk, jazz-funk, and soul-jazz, right down to the dub-like lo-fi quality of the sound, as if it were recorded quickly in a cheap studio. If that were all Sounding out the City was, however, it would be an impressive technical achievement but not a particularly interesting album. As it happens, however, Michels and crew have created an album that has as much melodic content (check out the simply gorgeous ballad "Behind the Blue Curtains") and soul as any of the albums it's an homage to. Leading off with the group's prized 2002 debut single "Detroit Twice," Sounding out the City is a canny blend of hard funk and gentler tunes like the Latin-influenced "This Song's for You." All 11 songs (ending with an excellent cover of Isaac Hayes' "Hung Up on My Baby") are between two and four minutes long, which avoids the unfortunate tendency some similar bands have to run a good groove into the ground through static repetition. That's what the repeat button is for, folks, and it should get quite a workout on this hugely enjoyable album.