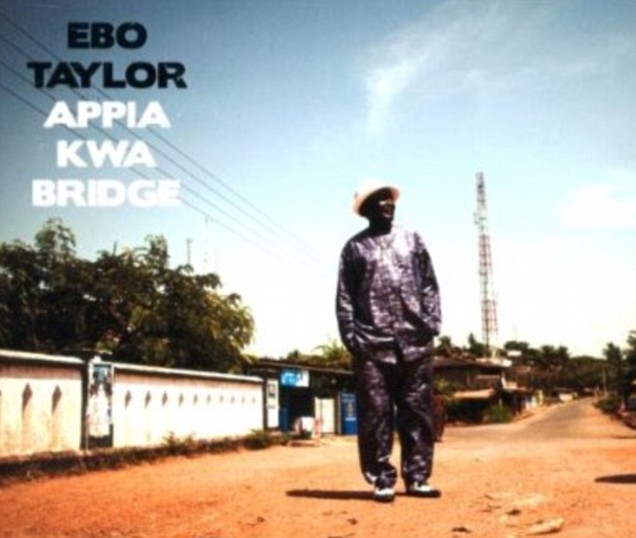 By Robin Denselow    from http://www.bbc.co.uk

Ebo Taylor may be in his mid-70s, but the versatile guitarist, singer and songwriter is still one of the finest musicians in West Africa, covering Highlife to Afrobeat, jazz and traditional songs. Starting out in Ghana in the 1950s, he was influenced by Highlife pioneer E.T. Mensah, who mixed West African influences with American big band styles brought to the region during the Second World War. Since then, Taylor has released solo albums and worked with a series of bands, including the Apagya Show Band. He has been helped recently by London-based label Strut, behind Taylor’s excellent 2010 studio album Love and Death and the following compilation, Life Stories.

Appia Kwa Bridge is a new studio album, recorded in Berlin with members of the Afrobeat Academy, with whom he was been touring since they recorded Love and Death together. It’s a sturdy set of mostly new material mixing Afrobeat and funk with traditional influences. “I wanted to go back to a Highlife feeling with this album,” he has explained. “The songs are very personal and it is an important part of my music to keep alive many traditional Fante songs, war chants and children’s rhymes.”

There’s more of his excellent guitar work on the upbeat Assomdwee, another religious piece that features compelling percussion from the great Tony Allen. Then comes a jangling funk piece, based on a nursery rhyme said to have been “composed by a lunatic in Saltpond, my home town on Ghana’s Cape coast”, and the cheerful title-track, also influenced by life in Saltpond (Appia Kwa Bridge is apparently a favourite lovers’ rendezvous).

Taylor may be best-known for his guitar solos with big band backing, but there are a couple of solo tracks featuring  just his guitar and voice. Yaa Amponsah, a favourite song in Ghana that dates back to the 1920s, and Barrima, a finely-sung lament for the death of his first wife, are further reminders of his impressive range.