Easy Stars All Stars - Dubber Side Of The Moon 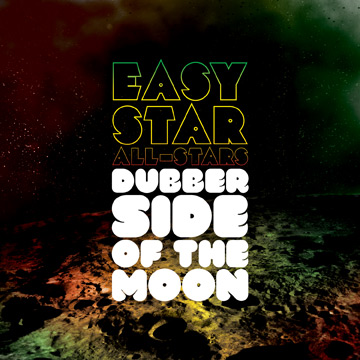 From Official Site :
DUBBER SIDE OF THE MOON
Bass Heavy Remixes and Dub Versions of the Complete Dub Side of the Moon

Following another celebrated run of global touring, the Easy Star All-Stars are geared up to release Dubber Side of the Moon on October 26. Inspired by the burgeoning dub step scene and dub visionaries such as On-U Sound’s Adrian Sherwood and Mad Professor, the Easy Star All-Stars have compiled the ultimate remix collection of their much lauded reggae smash Dub Side of The Moon. Each track features a unique dub producer exploring spaced-out reggae and bass-heavy remixes of the original Dub Side of the Moon – a reggae tribute to Pink Floyd’s iconic Dark Side of the Moon. Dubber Side also includes 4 bonus remixes (as well as 2 additional bonus tracks exclusive to the iTunes release).

Originally released in 2003, Dub Side of the Moon was followed by Radiodread (2006) and Easy Star's Lonely Hearts Dub Band (2009), establishing Easy Star All-Stars as one of the top international reggae acts of the last decade. The band has amassed over 300,000 album sales and is equally successful in live appearances, playing over 125 shows in 25 countries on 6 different continents in 2009 alone.

In fact, the idea of reinterpreting Dub Side spawned from the band’s intense touring schedule. They were continually being exposed to new dub and reggae offshoots around the world. “We really wanted to evolve these songs and put them in the hands of producers who might take it in new directions,” explains Easy Star Records’ Lem Oppenheimer. “It seemed like a good way to bring some of this newly developing futurist reggae right into our own music.” It was essential to find a balance between the classic dub masters and the new generation of bass-line enthusiasts, while also managing to express the band’s musical outlook and development.

Mad Professor had previously worked on the Radiodread album and was an obvious choice, as were John Peel favorites Dreadzone and Adrian Sherwood, both of whom fit into what Easy Star Records likes to call the ‘dub master vibe.’ Mad Professor’s mix is typically off the wall, whilst Adrian Sherwood manages to create a wall of sound through his adventures in space echo. The All-Stars’ resident soundman The Alchemist’s interpretation of ‘Money’ is a bass bleeder from the start and is probably the track that fits easiest into the dub step category, but Kalbata’s might be the most innovative mix on the album. Israeli born and signed to Soul Jazz Records, his mix merges the tech sound into dub-step. Boston’s mysterious 10 Ft Ganja Plant and Canada’s Juno-Award Winning Dubmatix both provide roots heavy remixes to the album.