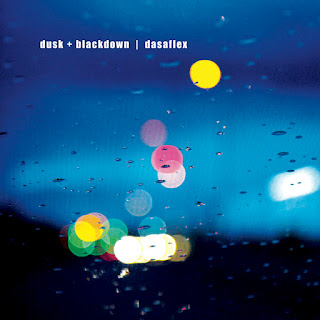 By Greg Salter  From http://musosguide.com

The return of Dusk + Blackdown, otherwise known as Dan Frampton and Martin Clark, is both a pleasant surprise and a bit of a big deal. Their first album together, Margins Music, released in 2008 and bringing together elements of dubstep, grime, field recordings and Indian music, was always supposed to be a one-off, and serves now as something of a snapshot of London’s musical landscape of five years ago, with dubstep just beginning to fragment and mutate. The duo haven’t exactly retreated in this period – Clark’s continued to write on music, and the pair’s monthly Rinse FM show showcases some of the more forward-thinking sounds that has risen out of the frameworks of genres like dubstep, funky and grime. In fact, they credit their constant contact with all this new music as the inspiration for returning to writing and recording, and new album Dasaflex certainly sounds like it’s been influenced by the bewildering array of genres and sounds currently bubbling away within electronic music in the UK.

In fact, just as you could see Margins Music as an attempt at encapsulating London in 2008, you could also listen to its follow-up as reflecting the sheer depth of variety of electronic music in London in 2012, and the strengths and weaknesses of such a situation. Dusk + Blackdown’s Dasaflex comes from a similar, cluttered sonic space as recent albums by the likes of Actress, Cooly G, Dean Blunt and Inga Copeland, LV, Four Tet, and Jam City, but it makes the most of this variety by turning to several, focused collaborations where musicians and producers come together and overlap.

The album opens with two of these collaborations. On the muted ‘Lonely Moon (Android Heartbreak)’, Farrah’s vocals weave in and out of a throbbing, shifting rhythmic backdrop, using the space of its seven minute plus runtime to expand and modulate, in a manner not unlike that of Cooly G’s longer instrumentals on her Playin Me album. Meanwhile, the second track is attributed to Dusk + Blackdown +, with that missing name after the second + widely assumed to be Burial. It certainly has all the hallmarks of a Burial collaboration, with the occasional snippet of female vocals and those now-familiar 2-step beats. Again, it’s another track that grows as it plays out, testament to the producers’ skill and patience (particularly when you consider there’s three of them involved).

The collaborative nature of much of the music on Dasaflex mean Dusk + Blackdown can focus on different moods or genres on particular tracks – this works particularly well on the ominous, syncopated techno of ‘We Ain’t Beggin’’ or the joyous, clipped vocals of the title track, which fall somewhere between house, UKG, even dancehall. These shifts can be a little disorientating at first – take the fact that ‘Dasaflex’ then falls into the Shantie-fronted grime of ‘Next Generation’, which is itself followed by the wobble of Blackdown’s own ‘R In Zero G’ – but repeated listens reveal this to be anything but eclecticism for eclecticism’s sake.

Instead, the majority of the tracks here stand up as great tracks in their own right, surprising and exciting because of the unique ways Dusk + Blackdown bring disparate elements together (take the stupidly fun acid/grime combination on ‘Hypergrime’ for example). In the end, you find yourself drawing lines between these different genres as you listen, and Dasaflex becomes less about divisions, boundaries or genres, and more about the possibilities and happy results of tracing a path through everything all at once.