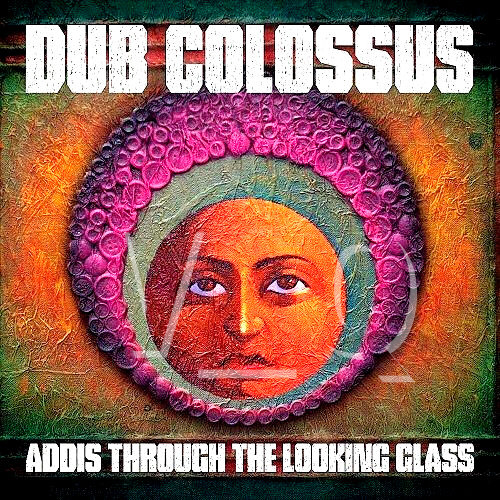 By David Katz  from http://www.bbc.co.uk

Former Transglobal Underground and Temple of Sound main-man Nick Page, aka Count Dubulah, formed Dub Colossus as an outlet for hybrid interaction with Ethiopian musicians he encountered in Addis Ababa in 2006. The resultant debut album, A Town Called Addis, was widely praised for its border-stretching capacities and sonic adventurousness, giving traditional Ethiopian styles a modern re-working with a thoroughly dubwise sensibility. Sophomore set Addis Through the Looking Glass continues the journey with an even more complex stew, featuring guest input from Dr Das of Asian Dub Foundation, Jamiroquai’s drummer Nick Van Gelder, and founding Steel Pulse member Mykaell Riley. But its overall irresistibility truly comes courtesy of the Ethiopian players, who were apparently more in the driving seat this time around.

The base of the music holds trademark elements of that which so enchanted audiences on the Ethiopiques series: vocalists Sintayehu Zenebe, Teremage Woretaw and Tsedenia Gebremarkos call to mind the legendary figures of Ethiopian music’s golden age, while sax man Feleke Woldemariam and the Bole Better Brass blow an updated Imperial Bodyguard style; expressive keyboardist Samuel Yirga also makes important melodic contributions throughout. It all serves to help ground the music in its Ethiopian origins, before Dubulah and crew drag in various blues, jazz, folk and rock elements, ultimately blasting the whole shebang into the dub stratosphere.

On tracks like Tringo Dub and the playfully named Dub Will Tear Us Apart, everything hangs together exceptionally well, appearing as the kind of music that might have resulted if Kingston’s finest dub mixers made a pilgrimage to Addis in the roots era. The bluesy re-make of The Abyssinians’ immortal Satta Massagana furthers this theme, and even if the Ethio-pop re-working of Uptown Top Ranking is a weaker link in the chain, instrumentals Feqer Aydelem Wey and Yezema Meseret are quietly dazzling. By the time we reach the closing goulash of Gubeliye, the disc has taken in hard bop, psychedelic rock, ragamuffin dancehall and streetwise RnB, hidden textures easily missed on first listen ready to be discovered. Dubulah says the aim is to constantly surprise, and he really pulls off the feat on Addis Through the Looking Glass, for predicting the course quickly becomes an impossibility.