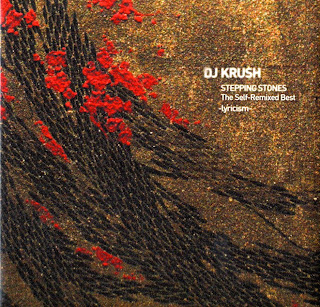 Stepping Stones is essentially a best-of and remix record in one. Taking songs from as far back as 1994's Strictly Turntablized, Krush collects and presents some of his best tracks — some reworked gently, others more drastically. Stepping Stones is split into two discs, lyricism and soundscapes — the concept behind each being decidedly self-explanatory. The first disc, lyricism, at once sounds the best; guests of this calibre — and in such density — are a rare occurrence: C.L. Smooth, Company Flow, Black Thought (alone on one, with Malik B on another), Aesop Rock, Mr. Lif, Anticon, and Mos Def. Throw in Japanese rappers, TWIGY & RINO, KAN — names in uppercase for esoteric Japanese reasons — and, finally, Esthero and, more excitingly, Zap Mama, and we're looking at just about the best collection of guests ever assembled on a hip hop/breaks record. The second disc, soundscapes, however, holds its own just as well against the first. This, really, should come as no surprise as DJ Krush has, on top of working with some of the DJ Shadow, DJ Disk, ?uestlove, and — albeit on a weaker track than the original — Kazufumi Kodama. There are five new tracks in total. Three of these are on the Soundscapes disc, one of which is a short intro. The other two (an original and its remix) are, obviously, on the first. You can purchase this record in most stores for twenty-five dollars, and you would be doing yourself a great disservice if you decided otherwise; Stepping Stones, serves as either a particularly clever way of recapping an exceptional career or as an excellent introduction to an excellent artist. Whichever way... if you are already a Krush fan and have heard most of these songs on the original records I can assure you that the new versions are well worth your money — if, on the other hand, you've never heard of Krush, buy this record, and when you've digested it, go out and buy the source material.
by Belvedere Jehosophat
permalink