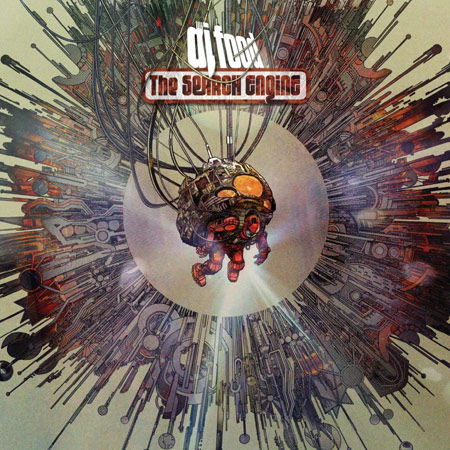 Eleven years after the last DJ Food album release Kaleidoscope, Strictly Kev and various friends, associates and like-minded collaborators return with a new full-length. The Search Engine distills the best parts from three EP’s worth of material into a continuous 56 minute album of unbridled creativity and laser-sharp focus.

Collaborations abound in the form of vocal appearances from Natural Self (aka Nathaniel Pearn), J.G. Thirlwell (Foetus, Steroid Maximus etc) and The The's Matt Johnson. The latter reprises his vocal on a cover of his own track "GIANT", nearly thirty years after its first release. Musical hook-ups include 2econd Class Citizen, who trades sample-attacks with Strictly for the suite of nine tracks that make up the 11 minute "Magpie Music", Dr Rubberfunk lends his drumming skills to the opening track, and old DJ Food partner PC and Solid Steel's DK add their own ingredients to the mix.

While there isn’t a single concept behind the record, certain themes twine their way through the music. In particular, the twin retro-future icons, astronauts and robots, float and bleep their way across the surface of the album, from the Henry Flint cover art onwards. Perhaps best known for his groundbreaking work on the 2000AD comic, Flint gave Kev access to a caché of his personal drawings to colour, as well as creating new work specifically for the project.

Perhaps the biggest surprise of all to those who associate the DJ Food name with the early 90s Jazz Brakes records is just how heavy The Search Engine is. Styled as a kind of psychedelic rock album made with samplers, Strictly Kev has not been afraid the frug the fuck out, with thundering drum work and fuzz bass perhaps the central muscial signature of the work.

Reflecting Strictly’s work as a designer as well as musician (he had to take the whole of 2010 off from recording while he did all the design for Ninja’s 20th ‘XX’ anniversary) the album comes in a number of formats: regular CD digipak, regular and expanded / extended downloads plus a limited comic-sized book with CD and a 7" flexi-disc of a bonus track.

As for the title, Kev explains that, “the way we live every day is helped by search engines of many shapes and sizes. Some people think they control and influence how we work and play. In this case, though, the 'Search Engine' could be something waiting to be found out in the vastness of space…”