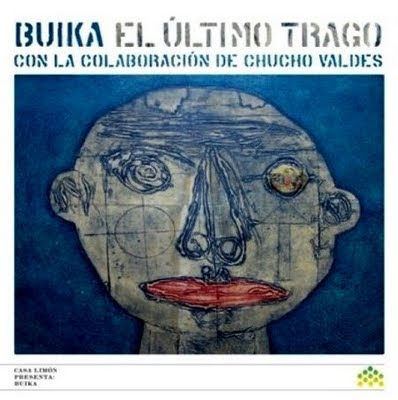 Having featured her songs in several of his film soundtracks, Spanish director Pedro Almodóvar dreamed up the idea of a tribute concert to celebrate the 90th birthday of legendary singer Chavela Vargas. The concert took place in Havana in April 2009 performed by another of Almodóvar’s favourites, Mallorcan flamenco singer Concha Buika with Cuban piano maestro Chucho Valdés. The live show was an absolute triumph and was immediately followed by a recording session resulting in El Ultimo Trago. Buika and Valdés pay homage to Chavela Vargas by pouring genuine emotion into their interpretations of her Mexican rancheras and boleros, tinged with flamenco, jazz and rumba.

When the producer Javier Limón suggested this encounter, conceived by Almodovar, what was your reaction?
Buika: Wow! I got a call and I found out the idea was to record with Chucho…I was so excited! I remember the first time I saw the maestro in concert, there were moments when I actually felt frightened by what I was hearing. The things he was playing…it was just astonishing.
Chucho Valdés: I accepted straight away because, with Buika, I felt something so special. Her sound, how she expresses herself, how she sings, the timbre of her voice…it’s so unique to Concha. I’m drawn to artists who have that particular quality – to inspire you to grow. My father Bebo, who knew Chavela, believes that Buika is the best possible choice of singer to interpret her repertoire. An absolutely perfect fit!

And you Buika, what have you learnt through playing with Chucho Valdés?
B: I can’t tell you everything, some of the discoveries I made are very personal things. What I can tell you is that every time we play together it just keeps getting better and better. I learnt that a melody is not just a series of notes. It’s as if each note is on a quest and it does everything possible to find what it is seeking. You see just how mischievous that note can be as it tries to seduce you. There are colours, melodic lines which can open up your deepest feelings. That’s what I learnt from the maestro – the way a note can reach right inside you. It’s a series of adventures, you see, a bit like Pirates of the Caribbean, but on an interior level.

Where do your two universes intersect?
B: Do-ré-mi-fa-sol-la-si-do, flat, sharp.

How did you prepare for this musical encounter?
B: I’m a front-line girl, a fighter. So apart from listening to the originals, to be honest I just wanted to go with the flow.
CV: In fact, we communicated a lot, and we built a relationship. It came very easily. From the first second we had exactly the same intuition about what would happen.

Tell us about those intense 11 hours in the studio to record El Ultimo Trago…
B: The session was a lot of fun, we really enjoyed ourselves. We could look over at each other, we were connected, symbiotic, in a very warm, family atmosphere. There were some fantastic moments, very beautiful.
CV: Not many artists dare to record vocals in one take. Here, you have an artist who is drawn so deeply into the music, that she sings as if she’s performing live. That’s why this album is so magical, it’s lit up by its own energy, in a direct, everlasting communion.

Tell us about Chavela Vargas
B: God, she’s the queen of the Hispanic world, the absolute queen. Like Edith Piaf is in France. I mean, what can you say…she is one of those artists who just floors you. You hear Chavela everywhere, forever, she stays with you. Her music has been with me for years…as if I’d recorded the same record my whole life! Today, I exist through this very beautiful woman.

She listened to three of your tracks. Did she like them?
B: Of course she liked them…I mean, how could she not like them?!

You both seem very proud of this collaboration
CV: This project was made with a lot of heart, love and spontaneity. We wanted to do something in the name of music, FOR music.
B: One of my ideas with this record was to push young people to go back to this love of poetry. That they go out there and reconnect with words and melody. That they return to what they have neglected, and don’t content themselves with quick little poppy songs for an instant hit. No. That they go back to something deeper, a real love of music.