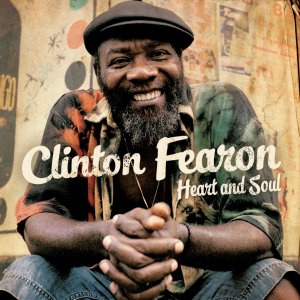 By Valentin Zill   from http://www.reggaeville.com

In life, some people get hyped for work they have not done, others laid foundations through hard work but never really got the respect they deserve. Of the latter is Clinton Fearon. With his latest album Heart And Soul, French roots experts of Chapter Two Records present yet another opportunity to catch up with this foundation legend‘s solo works (In France, by the way, Fearon gets much more recognition than in most other places).

The album contains twelve acoustic tracks Fearon had written for the Gladiators, which he joined in 1969. He spent 18 years with the trio before he moved on to other projects, with different bands and solo. Thus, roots reggae lovers are likely to already know all of the tunes on Heart And Soul: Chatty Chatty Mouth, Follow The Rainbow, Rich Man Poor Man, I‘m Not Crying... What is new is the acoustic interpretation of them.

Up front I need to clarify that I have never been too much of a fan of acoustic reggae albums. These tend to be a bit too simplistic for me musically - thus reggae‘s stunning, hypnotic catchiness gets attenuated a bit. In this case though, it leaves precious space for Clinton Fearon‘s singular, soulful voice to shine and make up for it. With bass, guitars and percussion, ranging from glasses of water to cowbells to congas and even a tama (the West African talking drum), instrumentation is varying enough to keep the riddims interesting.

Heart And Soul is a vibrant gem that just does not get boring. Make sure you check out the CD version: if you would opt for digital download, you would miss out on the booklet with Clinton Fearon‘s insightful remarks on the original versions of the tunes featured. Like this one, talking about Ernest Ranglin: “When he started on Let Jah Be Praised I was so excited I thought I was gonna pee in my pants!”