Cabiria - A Product Of Humankind 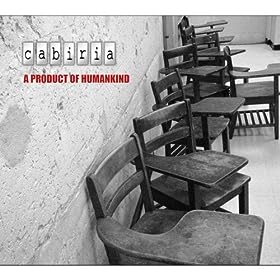 By Examiner from http://www.amazon.com

CABIRIA: Downtempo Trip Hop, Driven by Classical Voice and Harmony: If you have heard Cabiria perform around New York City this year, they are likely to have made a strong impression on you. Their unique and powerful sound, mixing modern and classical music, is impressive and haunting. Since the band s first Manhattan show at Side Walk Café this past April, they have had the opportunity to perform as a trio as well as a larger ensemble. On different occasions, they have been joined by a trumpet player, a bass player, and a drummer, who have joined them on stage as well as in the recording studio. The band has also ventured outside of New York, giving live performances in Maine and Massachusetts, both areas where they plan to return. If their talent and determination are indicators of future success, Cabiria is sure to travel further, literally and figuratively, in the future.

Cabiria has a unique sound that combines sensual trip-hop grooves driven by classical voice and harmony. The phrasing of their hauntingly melodic music borrows from classical works of composers such as Rachmaninov and Chopin, with a down-tempo groove inspired by Portishead and many others who have shaped the trip-hop genre. Cabiria's melodic sound is captured through the powerful operatic vocals of Rachel Jane Henry, who has been trained classically. Part of the band's characteristic sound is the interplay between Rachel's intense, high-register lyrical melodies, and Meredith Bogacz s sullen and seductive violin playing. The main accompaniment is the nylon string guitar played by Claudio Morsella, adding hints of Flamenco and Spanish technique to the brooding quality of Cabiria s sound. The trip-hop influence manifests through the combination of live drum and bass, defining this genre for Cabiria. Originally from Boston, Cabiria came to life in 2004 and developed a following in New England by performing most venues in the city. In 2006 they released their debut LP No Time for Dreaming which has been described as a Hauntingly Beautiful Operatic Trip-Hop Masterpiece . Now in New York City, Cabiria has been performing with a new lineup and has just released their six song EP, A Product of Humankind . This album reflects the new qualities in Cabiria s sound, as the band tries to market their music to a bigger audience. Cabiria is seeking interests from Labels, Film and other avenues for their music.