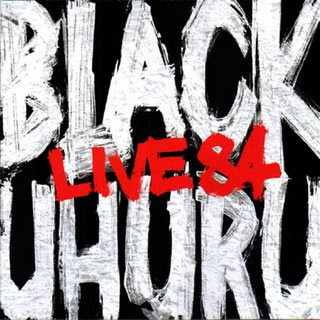 Since the core Black Uhuru crew (and by this, I mean with vocalist Michael Rose) is not likely to get back together anytime soon, newly released live dates from their heyday are always welcome. The wonderful Tabou1 (who released a great Gladitors disc a few months back) has just released Black Uhuru's Live 84.

As you'd expect from the title, this disc is a live date from 1984, featuring most of the group's biggest hits ("Shine Eye Gal," "Puff She Puff," "Sponji Reggae," etc.) but unfortunately, nowhere in the liner notes (nor in the promo material) is there any indication as to exactly where or when the disc was recorded. But, oh well... the music is still there.

Though I've never seen him in person, I can tell from the numerous live shows I've heard, Rose is one hell of a performer. Unlike many performers, his stage voice is not at all different from his studio voice. He manages to capture the essence of each song and magnify it during live shows, knowing when to talk and when to let his band do the talking.

Live 84 is a very good set of thirteen cuts covering 74 minutes. Included, in addition to the aforementioned tracks, are "Plastic Smile," "I Love King Selassie," "Youths of Eglington," "General Pentitentiary," "Happiness," "World is Africa," "Sinsemilla," "Guess Who's Coming to Dinner," and the pro-life anthem "Abortion." With a lineup like this, it's hard to go wrong.

"I Love King Selassie" is a stand-out high point due to its strong spiritual nature. "Youths of Eglington" is also quite good, due mainly to its incredibly catchy hook and bubbling riddim. And if you're aren't singing "there's a stalk of sinsemilla growing in my backyard" by the end of the disc, you must be deaf.

The sound quality of the disc is quite good (though it could be a tad better, I'd say). The very fact, though, that this is Black Uhuru with a previously unreleased live disc is enough to make one overlook any problems. Hunt this one down.