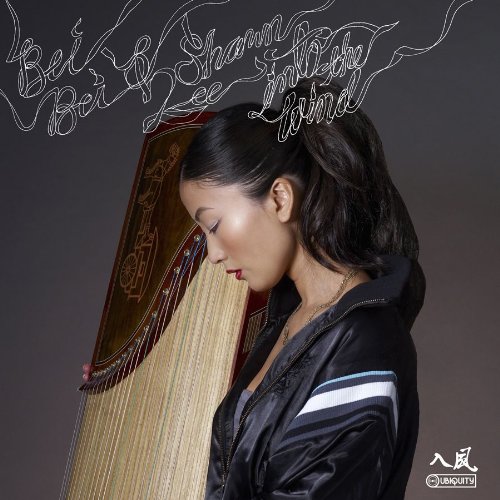 Press Release :
Into the Wind by Guzheng performer Bei Bei He and Ubiquity producer Shawn Lee marries a unique blend of ancient tradition with studio trickery. This uplifting, genre-bending sound clash, recalls the afro centric harping of Dorothy Ashby and hypnotic spiritual jazz of Alice Coltrane. With Lee adding equal doses of hip hop, electric jazz, and soul sensibility to the backing tracks, the captivating sound of Bei Bei's Guzheng comes alive on peaceful mellow joints as much as it does on Kung-Fu flavored funk tunes.

Falling in love with the 5 foot tall x 1 foot wide 21-stringed Chinese instrument at first site, Bei Bei began playing at the age of seven. While studying the Guzheng at a music conservatory in Hong Kong in 2002, Bei Bei developed an interest in jazz and groove-based music and hoped to make those styles with her instrument one day. Eight years later, now residing in Southern California, Bei Bei was contacted by Shawn Lee about making a record in the way she'd previously dreamed of, and she jumped at the opportunity.

These days it's not uncommon for artists to swap tracks and build tunes over the internet. But, in this case, the artists had to drop their guards, throw caution to the wind, and learn about each other's very different crafts as they went. Meeting only once (over pancakes and ice tea at an iHop in Huntington Beach!) the two emailed and swapped files for about a year to complete the record.

"Shawn was inspired by some of the traditional music that I play", she explains. But it took both of us being committed, fully self-expressed, inspired, connected to make this album happen", she adds.

The initial burst of inspiration led to the birth of early pieces like "Make Me Stronger" and "Bei's Bossa", which were new creations based on ancient tunes. The label was so excited by these two that they shared them with label mates and this is how Georgia Anne Muldrow ended up singing on the entrancing "Make Me Stronger", and later on "Willingness".

However, further collaboration between Bei Bei and Lee became more challenging. "I had trouble following the key changes in "The Ambush" because the Guzheng is conventionally tuned into a pentatonic scale without the 4th and the 7th of each key. That would not allow me to play pieces like this, she explains. "After many experiments, I tuned each octave on my instrument into its own diatonic scale, and it worked perfectly."

Swapping notes with each addition and change, they made their way through eleven tracks. The title track was the last track to be completed, and also became the opening track on the album. But it almost didn't happen. Lee had made the basis of "Into the Wind" which sounds very different from the finished version. Bei Bei got a serious dose of writers block and wanted to give up. But Lee encouraged Lee to make any changes she wanted. "His words pumped me up, so I put myself together and went back to my instrument until the last note was recorded. This is true teamwork that takes part not only in the art, but also in the human spirit," says Bei Bei.

The Guzheng is over 2000 years old and belongs to the Asian long zither family; Japanese Koto, Korean Kayageum, and Vietnamese Dan trah are children of the Guzheng. It was used in both folk and court music in the ancient China. Bei Bei started to play the Gu Zheng at the age of seven and received her professional musical training, majoring in the Gu Zheng at the Central University of Nationalities in Beijing, China and the Hong Kong Academy for Performing Arts in Hong Kong from several Gu Zheng masters such as Li-Jing Sha, Mu-Lan Hai, Chun-Jiang Teng, and Ling-Zi Xu. She is a multi-award winner of many national and international competitions such as the 1993 National Chinese Instruments Competition, the 1999 College Students Art Festival in Beijing and the 1st Dragon Cup International Gu Zheng Competition in 2001.

Bei Bei has been featured as an instrumentalist and composer at Knitting Factory Hollywood, Ford Amphitheater, Barclay Theater in Irvine, UCI Claire Trevor Theater, Mt. Sac College Performing Arts Center, Illinois Wesleyan University, Carrol University, Gustavus Adolphus College, and more. As a studio musician, she recorded for Sci-fi Channel's "Battlestar Galactica". As a composer, she composed music, performed and engineered for China Central TV documentary series "Dun Huang". She released her debut album Quiet Your Mind And Listen in 2006. Her collaborative album Heart of China, made with Richard Horowtiz, was released by Killer Tracks in 2008. Her dance music works include "Dancing Dream" which was premiered at the Asian American Children's Dance Festival in 2007. She is the director of Lotus Bud Gu Zheng Studio in Placentia, CA, where she teaches students to play and perform. Since 2008, Bei Bei has been performing with the Orchid Ensemble, a trio which consists of Bei Bei on the Guzheng, Lan Tung on the Erhu and Jonathan Benard on the Marimba and percussion. The feedback that she has received as she has introduced American and international audiences to the Gu Zheng and its broad and varied repertoire has been extremely positive. Her passion for her instrument and the beauty of her music have touched people across the world.

This is the first record of many in 2010 for the unstoppable Shawn Lee. His last two albums were also collaborations. These previous two releases saw him work with Clutchy Hopkins on the Fascinating Fingers album and with Money Mark and Tommy Guerrero under the name Lord Newborn & The Sugar Skulls. He has plans to do some major interpretations of famous classical pieces later in the year, and has an all vocal collaboration album in the works, too.

For an introduction to the Bei Bei and Shawn Lee project, Ubiquity released a limited edition 10" EP, featuring the original and instrumental versions of "Make Me Stronger," with a vocal by Georgia Anne Muldrow (who had also recently produced and sang on records by Mos Def and Erykah Badu.) Alongside these, was the storming version of the Billy Paul psychedelic soul opus "East," also featured on Into The Wind. A remix by UK producer Floating Points (whose "Love Me Like This", "Vacuum Boogie", and "Radiality" releases have been turning heads all year long) took "Make Me Stronger" deep into bugged out Wu-Tang territory. Reaction was positive from Berlin to Losa Angeles, with KCRWs Garth Trinidad calling the tracks "A ray of light in my world," and BBC Radio 1 DJ Mary Anne Hobbes saying "Love love love this."
permalink
Partager cet article