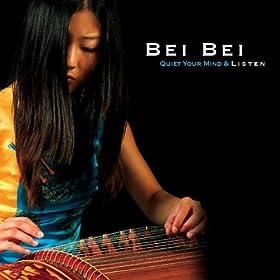 The Gu Zheng is by no means an easy instrument to play, and anyone who can become proficient at it deserves a nod of respect. But it takes a special person like Bei Bei to make the Gu Zheng sing in voices it has perhaps never sang in before. Bei Bei's technique and mastery leaves the listener breathless! She is as talented as she is pretty, and clearly one of the BEST Gu Zheng players EVER to sit in front of the instrument. It's almost as if the instrument is playing itself or merely an extension of her body. Her execution is flawless and her musical vocabulary is startling. Then there is her sensibility with which Bei Bei approaches the Gu Zheng. She is rooted in pure classical Chinese music, but her sense of adventure and urge to make the Gu Zheng sing in new voices is evident even to a pair of Western ears such as mine which have only faint familiarity with traditional Chinese music.

That said, I do own a few albums of traditional Chinese music that I enjoy listening to, which is more than you can say for most non-Chinese/Western people. And I just MIGHT be willing to go as far as to say that if you are looking to introduce yourself to traditional Gu Zheng music, Bei Bei's "Quiet Your Mind And Listen" (excellent album title!) is the only CD you'll ever need.