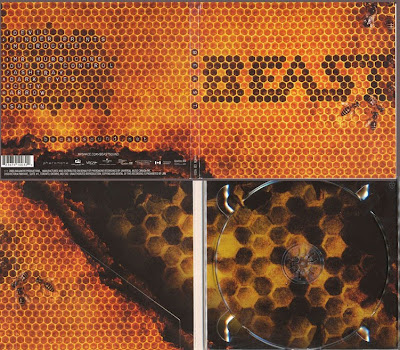 I’ve been searching for a good album to write about which would make a break from the more atmospheric music I’ve been talking about, for the sake of diversity, so I was thrilled when a good friend of mine recommended this band yesterday. I had only heard one of their songs previously, and I guess it didn’t make much of an impression at the time, because they slipped my mind completely. However, yesterday, being in a more exploring mood, I managed to compile and listen to their entire album on YouTube, and I decided it’s an excellent opportunity to take a step into some dangerous territory.

That’s my impression regarding this album, the one word I would use to sum it up – dangerous. The feeling of urgency and alertness it creates, the ominous pulse of the bass lines and the down-and-dirty distorted guitars make for a truly bad-ass release that chases you, corners you, nips at your heels with pearly-white fangs and has a way of keeping on its mean side which is positively delightful. Not to mention Betty Bonifassi’s machine-gun rapping, marred by an anger and sorrow which I honestly never thought could be expressed so powerfully through this particular method of delivery. It’s not that I have a distrust towards rap in general, it’s just that I have a hard time focusing on the lyrics of any given song, so for me a very lyric-heavy act will probably provide a real empathic challenge. However, Betty Bonifassi manages to take it to a level where the voice doesn’t feel like it’s just providing texture and dives headlong into a realm where rhythm and raw energy explode on the musical canvas with a vengeance of a sort I’ve never really experienced before.

Beast is the creative partnership between two French artists working in Montreal. Betty Bonifassi had already worked as a musician for twenty years before creating Beast, and Jean-Phi Goncalves is a pretty well-known composer and producer, having worked with Lauryn Hill, among others. They ran into each-other while working on a video game soundtrack and, realizing their track for the game was much more aggressive than they had anticipated, and also much more personally cathartic, they decided to spawn Beast, a band born with the same urgency their songs convey. They had recorded the first track on the album after one session – that’s the kind of creative click which shows on each and every song, it defines the sound and propels the music.

The influences are diverse and spectacular, ranging from accents of 40s swing music to Rage Against The Machine, from Massive Attack to Nina Simone. Betty Bonifassi has a way of navigating through the immense possibilities of her vocal range and power which allow her to explore these wide ranges and styles. The result is a sound they named “trip-rock” (which doesn’t feel quite right to me, but hey, whatever floats their boat). Unfortunately, the band is on an indefinite hiatus at the moment. Given the personal nature of the music, the frustration and anger it stems from, and the fact that this particular brand of sound had not been the usual thing for either of the artists involved, it makes sense that one album would act as a powerful means of exorcising some of those demons and that they would be left quieter and more centered afterwards. The music incites a similar cathartic reaction in the listener, so why shouldn’t it act the same way for the creators? However, that means that the Beast will remain caged for, probably, years to come, at least according to a 2011 Betty Bonifassi interview.

I leave you with two of the most ferocious tracks on this album. Hopefully they’ll incite the same electrifying excitement in you as they did in me.