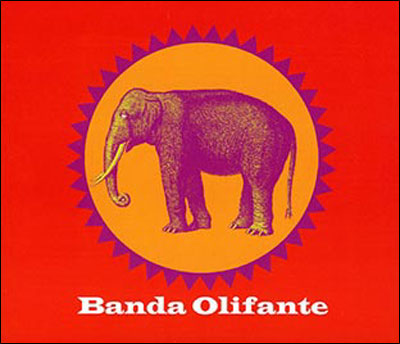 By George De Stefano  from http://www.rootsworld.com

Brass bands became popular in Italian towns and villages in the 1800s, performing for funerals and religious processions and rituals. The bande also brought the music of opera houses and symphony halls - albeit in easily digested excerpts - to the workers and peasants who hadn't the means or inclination to enter those temples of high culture. Italian immigrants formed bande in North America, often under the auspices of Catholic parishes, and the tradition still endures. On religious feast days and other holidays, the marching band of St. Mary's Church parades through the streets of my Queens, New York neighborhood, playing their repertoire of hymns, marches, arias and Neapolitan songs.

In Italy, some noted jazz and pop artists have turned to banda as a vehicle for new forms of expression. Sicily's Roy Paci, who started out as a trumpeter in jazz bands, has collaborated with two groups, Banda Ionica and Banda D'Avola. The latter, which specializes in secular marches, is a typical Sicilian marching band, full of brassy exuberance. Ionica, especially on their Paci-produced album "Matri Mia" (2002), are far less traditional and much more irreverent - check their madcap version of folksinger Rosa Balestreri's lament, "Mi votu e mi rivotu." With its cabaret cum banda arrangement and vocal in Sicilian and German, it sounds like Paci's channeling Kurt Weill.

With his band Aretuska, Paci made something wonderful out of that cheesy bit of americanata called "Mambo Italiano." Paci's "Cantu sicilianu" opens with the horn section playing a slow and solemn intro before the full band bursts into rollicking ska, as if the coffin being carried through the streets of Palermo in a funeral procession suddenly popped open and the corpse leapt out and started dancing.

The debut CD of Banda Olifante isn't as innovative as Paci's work with Ionica and Aretuska. But Olifante has made a well crafted and thoroughly enjoyable recording that is grounded in the Italian banda tradition but isn't limited to it, either in repertoire or instrumentation. Besides brass and woodwinds, the 13-piece ensemble includes double bass and drum kit, as well as African and Afro-Cuban percussion. Led by two veteran jazz players, Stefano Bertozzi and Massimo Eusebio, this self-described "brass fusion band" exudes an infectious energy and joy in music-making.

The band's name refers to a medieval carved ivory horn - hence the rendering of an elephant on the CD jacket - celebrated in the Chanson de Roland. Most of the medieval olifants made in southern Italy were the handiwork of Arab craftsmen, according to the Oxford Companion to Musical Instruments. Perhaps in homage to this lineage, Banda Olifante serves up several Maghrebi-influenced numbers. But the record, which deftly straddles jazz and world music, also has the Balkans, Jewish Eastern Europe, Spain and Latin America, India, New Orleans, and Africa in the mix.

The album opens with a folksy touch - the creaky but jovial voice of an elderly Italian man offering a blessing of "pace and fortuna" (peace and good luck). That nicely sets the tone - warm and ebullient - for the twelve tracks, most of them original compositions, which follow. The band kicks in with "La Madonna dell'Uso," a stirring, echt-Southern Italian number that sounds traditional but was written by reedman Stefano Bertozzi. The players don't hang around the Mezzogiorno for long. The next track, the misleadingly titled "Casbah Funk," evokes Manu Dibango and the Average White Band. "Los Peces," a Christmas carol popular in Spain and Latin America, is of unknown authorship, but the melody has definite Arabic qualities. Olifante's rendition, however, brings the song closer to klezmer.

There's a pronounced klezmer flavor throughout the record - Italians are crazy for shtetl soul - and one of the best tracks, "Biba Zoom," features The Klezmatics' trumpeter Frank London. The band turns to India with "Man Chali," the theme of a popular 1970s Hindi film of the same name, while "Big Noise" is Latin jazz, complete with the rhythmic scrape of a guiro and a clave heartbeat. Saxophonist-composer Oliver Lake's "Africa" is the album's only other straight-up jazz number. It's well played, but I wish the soloists had been given a little more space to cut loose.

The members of Olifante are all strong players - it's no secret that the level of musicianship in Italian bands tends to be quite high - and their guests are pretty impressive, too. Besides Frank London, there's accordionist Simone Zanchini, whose solo heats up "Le Moko," its Gallic-North African ambiance inspired by "Pépé le Moko," the 1937 French film about a Marseille gangster hiding out in Algiers. "Eclipse," the only track with vocals, features Vincenzo Vasi, a self-described practitioner of "musica eterodossa" - we can call him an avant-gardist - whose wordless, percussive chant is reminiscent of Tuvan throat singing.

Banda Olifante reminds me of another Italian big band, the Orchestra di Piazza Vittorio. Led by an Italian, Mario Tronco, formerly of Avion Travel, but composed of immigrants to Italy, the orchestra's material reflects its members' musical cultures - Indian, Arabic, African, and Latin American. Olifante, though an all-Italian band, has a similarly multicultural repertoire. And both bands, their strengths not withstanding, suffer from the same weakness: so much eclecticism makes for a diffuse group identity. What is Banda Olifante, besides a group of highly proficient musicians playing various "ethnic" musics? Maybe their next record will give us a better idea.