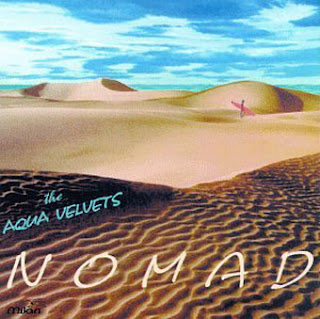 Despite their watery name, the Aqua Velvets don't spend the bulk of this album riding the waves. In fact, the title and desert cover art seem to point in the opposite direction. And although they still obviously love reverb and twang, the band, led by guitarist Miles Corbin, proves it is more diverse than previous albums might indicate. Sure, there's plenty of Duane Eddy/Ventures licks, but the Aqua Velvets introduce them to a world music palette. This is surf-influenced music that transcends its previous limitations. To emphasize that, the disc kicks off with the spaghetti Western atmospherics of the title track before the group gets its collective feet wet in "Surf Nouveau"'s more straightforward, Shadows-style approach. But they really wander off the beach on the bongo-infused slow burn of "Snorkle Mask Replica," where backwards tapes provide an eerie backing for the multiple, overdubbed guitar solos. Ennio Morricone is referenced often here, especially in the dusty "Return to Paia," a high, lonesome mood piece. "In a Spanish Mood" is just that, with a vague flamenco groove that snakes through drum-less percussion with Corbin's echo-heavy solo. With one foot on an American surfboard and the other on foreign soil, the Aqua Velvets show they are ready to push the envelope of their often constricting field without abandoning it. The closing tracks tread water, swimming in calm seas, yet not really going anywhere, although the reggae rhythm of "Shrunken Head" is a calm coda. But Nomad is an eye-opening, if not quite groundbreaking album in a genre that has far too few of them.