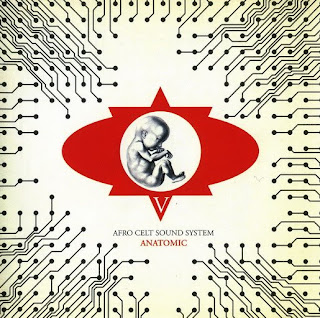 By Chris Moss  from http://www.bbc.co.uk

The many avid fans of Afro Celt Sound System will no doubt applaud this, the band's fifth album, as another daring sonic landscape and a new phase of their ground-breaking ten-year cycle.

But the synth-driven incantatory sound goes back decades and this is essentially Deep Forest, Enya and Jean Michel Jarre mixed with some astute picking of guitars and pounding of exotic drums to produce a self-consciously globalised ethnic slush. Nothing wrong with that, of course, and with the volume cranked up, this is a powerful, brain-cleansing music for unfocused meditation, or ironing perhaps.

But Afro Celt Sound System are not strict ambientalists and employ many of the musical tricks advanced by pop-synth whizzos like Moby and the Chemical Brothers (and all those long-lost rave DJs). Track 3, "Mojave", is typical: we get a slow-building crescendo, dreamy swirling pipes, stadium-rock guitar, and a melting pot of music with Native American and Celtic elements in abundance. The title track takes you elsewhere, a great beat and pan pipes suggesting the band have one foot on Ben Nevis and the other on Aconcagua. It's a bit fly-by-night, but all good fun.

At other times, as on "Dhol Dogs", they seem to lean closer towards Glass-style minimalism, and it would be interesting to see them pushing further into atonality and abstract compositions.

The band contributed to the soundtrack of Hotel Rwanda and are joined again by singer Dorothee Munyaneza as well as Uzbeki star Sevara Nazarkhan. The range of elements across these nine tracks is considerable, and there's really not a bland moment. The clear, sometimes strident acoustic trills and samples in fact allow the synths to do what they do best: blast out massive chords and reach for zeniths of modulation.

Polished, formulaic, politically correct, this is easy listening for those with ethereal inclinations but its full of great tunes, impassioned vocals and little surprises along the way.