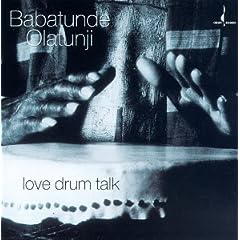 On April 6, 2003, the music world lost a remarkable individual, a legendary musician, teacher and humanitarian. Babatunde Olatunji led a rich life of creativity and passion and Chesky is honored to have produced Olatunji's last commercial release, love drum talk, nominated for the 1998 Grammy award of Best World Music Album. The African Music Encyclopedia writes, "Baba was the single most important contributor to the popularization of African hand drumming in the United States....spreading his love of the drum, song, music, and African culture inspiring generations of American musicians, many of whom have devoted their careers to African music and who are, in turn, spreading Baba's message to their students." All of us at Chesky will miss Babatunde Olatunji and remember him with the utmost affection and admiration.
"The spirit of the drum is something that you feel but cannot put your hands on,
It does something to you from the inside out . . .
It hits people in so many different ways.
But the feeling is one that is satisfying and joyful.
It is a feeling that makes you say to yourself,
"I'm glad to be alive today! I'm glad to be part of this world!"
---Babatunde Olatunji (The African Music Encyclopedia www.africanmusic.org/artists/olatunji.html)
In a church on a leafy street in Chelsea, Manhattan, saints in stained glass windows smile benevolently down on the drums of Africa beating out their message of spiritual love. At the center of a group of players from Africa, the Caribbean and America is the venerable Babatunde Olatunji, the Nigerian drummer whose landmark 1958 release, Drums of Passion, first restored Africa's ancient and always modern rhythms to the land that had banned them in slavery days, America. This recording is the tenth in Olatunji's Drums of Passion cycle that explores integral facets of the human experience, from healing to liberty. Now Olatunji turns his attention to life's brightest aspect. "This one is about love," he declares exuberantly. "What is love? I'm trying to give the different meanings that we think about love. Love is a lifetime process. It might take a lifetime for me to know you." He quotes an African saying: "What one desires most in one's heart finds frequent expression in one's words." Olatunji's words are sung in his tribal language, Yoruba, and the drums that surround him - his ashiko, the big, curvaceous mother drum, the smaller, cylindrical djembe, the djun-djun and the talking drum - transmit the message as eloquently as the lyrics. Each track invokes another face of love and tells stories of Olatunji's own life. On Spell M6nisola, Olatunji sings of his American-born granddaughter going to study at her grandmother's school in Ibadan, Nigeria, as he articulates the young girl's name in drumbeats. The travails of romantic love are addressed on Sare Tete Wa, yearning as it begs, "Lover, please come running back to me." Fear of commitment permeates Long Distance Lover, and a parallel anguish fuels the doomed passion of Don't Know Why My Love. Upbeat dance floor lust grooves through What's Your Number, Mama?, in which a dancer's devious routine to acquire a love object's phone number vies with his mental calculations of her measurements. A more abstract love, the intimate conspiracy between dancer and drummer, inspires Bebi Alolo and Love Drum Talk. The drums were a daily backdrop to life in Babatunde Olatunji's birthplace, the fishing village of Ajido, some forty miles outside Lagos. He arrived in America in 1950 and traveled on a segregated "Jim Crow" train to study at Morehouse College. "I started the whole music thing to protect my sanity," he explains. Stunned by the ignorance of his fellow students, who assumed all Africans lived among lions in the jungle, Olatunji began inviting them to drum and sing in his rooms and discovered his life's mission as Africa's musical ambassador. Before the birth of the Civil Rights movement, Olatunji played racially mixed gigs in the South; in New York, he jammed with Cannonball Adderley, Max Roach and John Coltrane, who helped establish his ongoing Harlem-based organization, OCAC (the Olatunji Center for African Culture). The former political science student grew to be the confidante of leaders from Kwame Nkrumah to Martin Luther King. A recent association with the Grateful Dead's Mickey Hart, with whom he formed the influential percussion supergroup, Planet Drum, further expanded his influence. Olatunji remembers, "When I first came to Harlem, people would insist, 'I'm not from Africa!' It went from there to saying, 'I'm a black person,' then it became 'I'm an African American.' Now, they say, 'I am an African.'" That evolution of identity and consciousness may be Olatunji's greatest triumph.
permalink