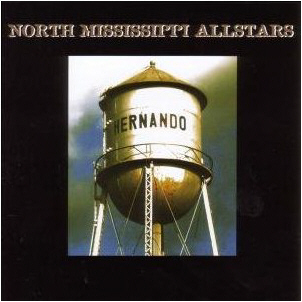 
REVIEW ALLMUSIC (by Steve Leggett)
The North Mississippi Allstars have stripped things down a bit for Hernando, their fifth studio album and the first for the group's recently launched label Songs of the South, merging their usual Southern folk blues sound with elements of metal and even a touch of swing, all of it done with the lean efficiency of a maturing power trio. Led by Luther Dickinson's soaring slide guitar work and anchored by a thundering rhythm section of brother Cody Dickinson on drums and Chris Chew on bass, NMA on Hernando are no less than an obvious continuation of the late-'60s blues-rock tradition of Cream and the Jimi Hendrix Experience, with a little bit of AC/DC strut thrown in, and while the result isn't perhaps their best album, it isn't far off the mark, either. Recorded and produced by the legendary Jim Dickinson (father of Luther and Cody) at his Zebra Ranch Studio in Coldwater, MS, just a stone's throw up Highway 51 from the band's hometown of Hernando (hence the title), the sound is crisp and thundering, but still retains the ragged looseness that is a NMA trademark and is also one of its biggest strengths. This is blues-rock done Mississippi style, and if NMA swaps out a little of its hometown R.L. Burnside/Otha Turner leanings for the Led Zeppelin side of the equation, it isn't a drastic shift, and songs like "Keep the Devil Down" and "Eaglebird" (which features Cody Dickinson on electric washboard of all things and carries a co-writing credit for Kid Rock's bass player Aaron Julison) would fit seamlessly into any of NMA's live sets from the past ten years. Other highlights include the energetic skip-a-long "Mizzip," "Come Go with Me" (with a guest vocal from James Mathus), and a startling version of Champion Jack Dupree's "I'd Love to Be a Hippie" (sung by bassist Chew and featuring piano from East Memphis Slim) that is easily the most striking track on Hernando. Cut after cut veers off in interesting ways, and Luther Dickinson's guitar leads are always dangerously reckless and thrilling, echoing early Hendrix at times. The only thing missing on Hernando is that North Mississippi fife and drum tradition that NMA have so wonderfully updated for the rock era on past albums. It's understandable that the band might want to move on from that approach a little (and truthfully, it stills hovers here intangibly in the background), but they have always done it so well that Hernando seems strangely incomplete and unfinished without it.
permalink
Note :